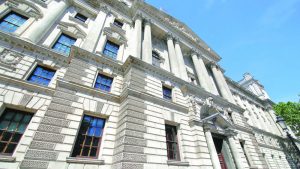 John Whittingdale, the minister for media and data, has taken over responsibility for the UK review of the 2005 Gambling Act from sport, heritage and tourism minister, Nigel Huddleston.

A Conservative minister who has previously been a proponent of gambling expansion has been put in charge of the UK’s review of its gaming legislation.

The government confirmed it would make good on its manifesto pledge to conduct a “major and wide-ranging review” of the UK’s gambling legislation back in December.

At the start of March, it was announced that John Whittingdale, the minister for media and data, would be taking over responsibility for the review of the 2005 Gambling Act from the sports, heritage and tourism minister Nigel Huddleston.

The MP for Maldon previously served as secretary of state for culture, media and sport from 2014 to 2016 during David Cameron’s government.

It is understood the switch was made due to Huddleston’s heavy workload, with sport, tourism and heritage set to play a significant role in the UK’s recovery from the pandemic, together with the upcoming Commonwealth Games next year.

In the past, Whittingdale has opposed tighter regulation of the industry and was in favour of allowing fixed odds betting terminals (FOBTs) at motorway service stations and amusement arcades. In 2012, the minster was chair of the culture select committee when it produced a report suggesting that FOBTs should be permitted in bingo halls and amusement arcades.

“The minister [Whittingdale] fully supports the comprehensive, evidence-led review of the gambling act to ensure that legislation is fit for the digital age,” said a spokesperson for the Department for Digital, Culture, Media and Sport.

Whittingdale’s appointment has been welcomed by the Betting and Gaming Council (BGC). “I know John well from my time in Parliament and in the music industry,” stated Michael Dugher, CEO of the BGC. “John commands huge respect and he is a formidable politician who brings a wealth of experience and knowledge. The BGC represents the bulk of the regulated sector – from high street betting shops, casinos, online gaming and bingo – and we look forward to working with him.

“This is an uncertain time for many of the more than 100,000 people who work in the industry as we navigate the sector safely out of the COVID restrictions. Our industry wants to play a full part in helping kickstart the economy, supporting jobs and growth, and contributing to the exchequer,” he continued.

“The BGC has warmly welcomed the Government’s Gambling Review, which is a golden opportunity to build on the work we have already done on raising standards, promoting safer gambling and driving big changes across the industry. We know how important that work is to the DCMS.”

Predictably, the change in ministerial oversight has not been without its critics. “Given the new appointee has a history of being strongly supportive of the industry, I very much hope he will be focused on the evidence and not influenced by aggressive industry lobbying,” said Labour MP Carolyn Harris, who chairs the Gambling Related Harm APPG.

The British Gambling Commission has taken further action against Personal Management Licence (PML) holders at Caesars Entertainment. “All personal licence holders should be aware that they will be held accountable, where appropriate, for the regulatory failings within the operators they manage,” said Richard Watson, executive director at the GC. In April 2020, the regulator announced that Caesars Entertainment UK would pay £13m and implement a series of improvements following a catalogue of failures including those involving VIPs.

“The investigation into PML holders was launched because there were concerns they had failed to take all reasonable steps to ensure the way in which they carry out their responsibilities in relation to licensed activities does not place the holder of the operating or any relevant premises licence in breach of their licence conditions,” the Commission said in a statement.