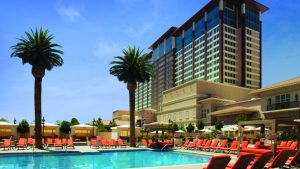 The California property, owned by the United Auburn Indian Community, broke ground on its new 4,500-seat entertainment venue in mid-March.

Thunder Valley Casino Resort in Lincoln, California has broken ground on a $100m expansion. The project will see the addition of a state-of-the-art indoor entertainment facility, called The Venue. Construction is due to be completed by early 2023.

“Today marks a momentous milestone for the United Auburn Indian Community and Thunder Valley Casino Resort,” said Dawn Clayton, Thunder Valley general manager. “The Venue at Thunder Valley will allow us to expand our entertainment footprint in a big way as we continue to provide unparalleled experiences for our guests.”

The 150,000 sq ft facility will have 4,500 seats and host musical acts, comedic performances and sporting events, and will provide large event space for conferences and banquets.

“The United Auburn Indian Community is proud to have the ability to continue to position Thunder Valley as Northern California’s premier entertainment destination,” said Gene Whitehouse, the United Auburn Indian Community chairman. “The Venue is the future of entertainment at Thunder Valley and we look forward to attracting big-name performers year-round.”

The project’s general contractor is McCarthy Building Companies, and the architectural design firm is OTJ Architects. In total, the project will create more than 200 construction jobs.

“We know that entertainment brings people together, the different genres, and music is one of those things that does that,” Clayton stated. “And after this past year, everybody was, you know, had some really tough times, now we have something so much to look forward to.

“As we move through the different tiers …and get back to what normalcy is, this is really exciting. It gives people energy. And, it says, as we continue to build and develop ..this is what lies ahead.”

Located 30 miles east of Sacramento, Thunder Valley Casino Resort opened in June 2003. The property features 270,000 sq ft of gaming space, including 3,500 slot and video machines, 100 table games, a live poker room with space for tournaments of up to 500 players, and a bingo room with a capacity of up to 800 players.