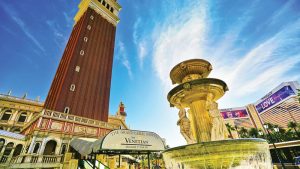 Speaking during his first earnings call since taking the helm, Las Vegas Sands new chairman and CEO Rob Goldstein said the company is looking at potential expansion opportunities in the US, and is also open to sports betting and iGaming.

“We’re looking at…a multitude of opportunities…and yes, we’ve looked at digital,” Goldstein stated. “We are exploring opportunities, looking at what might be out there.” However, speaking during the company’s Q4 earnings call, he emphasised there is currently “nothing concrete” to report. Expanded gaming in New York has been a big topic in recent months, as the state seeks to bounce back from the impact of COVID-19.

“I don’t think it’s any secret that we’re big believers in New York. So we’re definitely on the hunt. It’s still a long way to go before we …see where they want to build and what they want to build, but we are going to be there,” Goldstein conceded. “If it’s real, and it’s done properly, we think the returns could be Sheldon-like.”

The operator also confirmed in December that it is looking to push for the legalisation of casinos in Texas. “We’re kicking the tires down there too. You can’t deny the power of Texas and the size and scale,” he affirmed. “It would be a great casino market for a land-based IR. It could be a huge opportunity.”

Sands posted a net loss of $376m on revenue of $1.146bn for the quarter ending 31 December. Full year net loss was $1.69bn, compared to net income of $2.70bn in 2019. This was the company’s first earnings call since the death of Sands’ founder Sheldon Adelson on 11 January due to complications from non-Hodgkin lymphoma.

“The company with the full and wholehearted support of the Board and the [Adelson] family will continue to honour Sheldon’s vision to protect and enhance his legacy,” said Goldstein. “We look forward to the future and do so with a lot of confidence and optimism. While the pandemic continues to impact our business adversely, we have achieved positive EBITDA in both Macao and Singapore in the fourth quarter, and there’s no doubt, in my mind, our business [will return] to pre- COVID levels in the future.”

Sands’ Las Vegas properties continued to feel the impact of the pandemic. The company’s operations in Las Vegas reported net revenue of $345m in Q4 compared with $853m for the same period in 2019. Hotel occupancy was 69 percent for the quarter compared with 97.3 percent in 2019. The average daily room rate was $229 a night compared with $450 a night a year earlier.

“We believe Las Vegas has plenty of gas in the tank,” Goldstein underlined, adding that Sands has seen “unbelievable” convention demand for “2022 through 2027”. “We remain very bullish on the return of Las Vegas. It may take longer than we want it to. It may take till the end of this year, as we see a visitation spike. “[But] the demand will be there.”

The company’s executives kept their cards close to their chest on the potential sale of its Las Vegas assets. Last year, it was reported that the firm was looking to raise $6bn with the sale of the Venetian and Palazzo resorts, together with the Sands Expo Convention Center.

“Las Vegas is a standalone entity. We’ve operated it for a long time. We think it’s a great asset. We think it has a great future. So obviously, we’re focused operating at this point,” said Patrick Dumont, Sands president and COO. Nevertheless, he acknowledged that “it’s nice to have additional liquidity on the balance sheet”.

“We want to make sure that we have the opportunity to do whatever we need to do during this unprecedented time.”