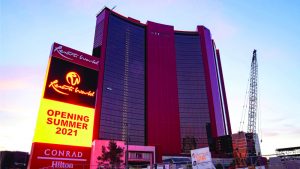 Sin City’s newest integrated resort, Resorts World Las Vegas, will open its doors in June, while its 5,000-seat concert and entertainment venue is due to debut in the autumn.

In April, it was confirmed that the property has begun taking guest bookings for its 3,500 hotel rooms across three Hilton brands – Las Vegas Hilton at Resorts World, Conrad Las Vegas at Resorts World and Crockfords Las Vegas.

A spokesperson for the property said that “95 percent” of Resorts World will be operational on opening day, including the casino, 40 food and beverage outlets, and 70,000 sq ft of retail space. The property’s 5,000-seat concert and entertainment venue is due to debut in the autumn.

“After years of planning and constructing this monumental property with some of the most innovative partners in the industry, Resorts World Las Vegas will redefine the hospitality standard in Las Vegas with unmatched dining and entertainment, more variety of hotel accommodations than anywhere else on the Strip, and the city’s most progressive technology,” said Scott Sibella, president of Resorts World Las Vegas. “We are filled with gratitude and excitement as we approach our opening this June and hope to play a role in Las Vegas’s rebound after what has been an incredibly challenging year for the destination and greater hospitality industry.”

The property has been a long time in the works. Genting Group bought the 87-acre site on Las Vegas Boulevard from Boyd Gaming in 2013 for $350m. Ahead of its opening, Resorts World has launched a short film, Stay Fabulous, to promote the property. “The concept of Stay Fabulous captures the essence of the Resorts World Las Vegas brand where guests are encouraged to embrace their individuality and create their own version of fabulous,” Sibella stated. “With stunning visuals and special appearances from A-list entertainers, the commercial gives a peek into the incredible experiences that await when our doors open this June.”

Produced by Hooray Agency and Psyop, in partnership with Nant Studios, Stay Fabulous launched during the Academy Awards on 25 April and will run on television in select markets as well as online and streaming services, marking the resort’s first national brand campaign.