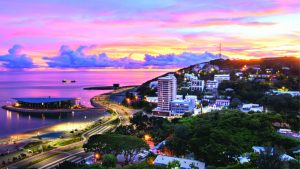 The National Gaming Control Board has signed an agreement with the Paga Hill Development Company to build a new casino resort in the capital Port Moresby. The regulator will now undertake a search for an international casino operator to run the new venue.

Papua New Guinea’s National Gaming Control Board will conduct a search for an international casino operator to run the country’s first casino.

The venture will see the NGCB partner with Paga Hill Development Company (PHDC). The regulator and the firm signed an agreement to build the new casino resort on 28 May.

To be located at the Paga Hill Estate in the capital Port Moresby, the first phase of the development, dubbed Pacific Pearl, will reportedly cost PGK150m ($43m).

“A Paga Hill Estate casino would be targeted at foreign tourists, with mechanisms in place to protect the local population,” PHDC said in a statement. The company “will now collaborate with NGCB to pre-select a casino operator for Paga Hill Estate.”

George Hallit, Paga Hill’s COO explained the project, which will also include a hotel, shopping malls and cinemas, would attract tourists, and highlighted that, at present, only onethird of visits to the country are tourism related.

The proposed casino resort has met with resistance from religious leaders and non-governmental organisations. Transparency International PNG argued the NGCB’s involvement in the development could lead to a conflict of interest with its regulatory role.

“In signing this agreement, the State through the NGCB is seriously undermining its independence as the industry regulator. Regulators like the NGCB have the important role to uphold and maintain the probity and the integrity of operators in the gaming sector and of individuals involved in the sector,” said TIPNG chairman Peter Aitsi. “They are the referee responsible for applying the rules of the game, they should not be running around as a player on the field. This type of conduct may lead to an abuse of the rules and bias in decision making”

Paul Barker, executive director of the independent thinktank the Institute of National Affairs, contended that Papua New Guinea lacks the legal infrastructure to address issues such as the heightened risk of money laundering. There is “no way that the country can afford to take on this extra burden of permitting casino activities”, he stated. “PNG also has a serious problem, where the regulatory body, the NGCB, is also seeking to be an investor in gaming ventures, including the proposed casino. This is wholly improper,” Barker added.

Despite the objections, Kanau highlights that the new resort would create jobs and help combat the economic downturn caused by the coronavirus pandemic. The country’s unemployment rate rose by almost 16 percent last year. “I see [enormous] benefits,” he stated. “If the casino comes on stream, we expect employment in this country, which is a problem at the moment – we have a very high unemployment rate. We expect a little bit of that ratio to be addressed in terms of employment opportunities.”

Critics of the project have also made reference to the abandoned hotel and casino in Boroko, a previous attempt to bring gaming to the country. “We don’t want to end up in the same situation as past failed investments like the five-star Boroko Casino Hotel scandal,” Aitsi argued.

Kanau clarified that this concession was not authorised by the regulator. “The former casino was never sanctioned by the gaming board. It was a political motivated activity carried out without due processes and regulations,” he stated.