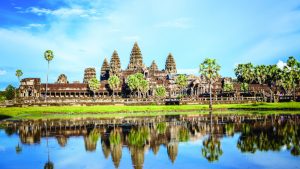 NagaCorp has confirmed it is working on “fresh plans” for a non-gaming resort near the UNESCO World Heritage site Angkor Wat, in Siem Reap, Cambodia.

In late March, Cambodia’s Ministry of Culture and Fine Arts said that the $350m resort could not “be implemented” as proposed by the company. NagaCorp was granted a 50-year lease on a plot of land “about 500 metres south of” the development- restricted zone of Angkor Wat back in November.

“The proximity of the project to the protected buffer zones of the [Angkor Wat] site as well as the scale, scope, and concept of the planned activities could indeed have an impact on the outstanding universal value for which Angkor was inscribed on the UNESCO World Heritage List,” the organisation said in a statement.

In light of UNESCO’s concerns, NagaCorp’s chairman Tim McNally said the operator had opted to go back to the drawing board.

“As a result we will continue to develop fresh plans that are acceptable to achieve the objective of creating tourism venues and at the same time respecting the historical and spiritual wonder of the Angkor Wat site,” he explained. “Although I cannot provide a timetable at this time …we will continue to develop an acceptable plan for this area that will accommodate and promote tourism in the best interest of the country.”