EveryMatrix and Kindred sign games distribution agreement for the U.S. 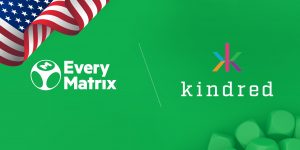 Listed on the NASDAQ Nordic Stock Exchange in Stockholm, Kindred Group is a highly reputable entertainment company operating nine global and local brands catering to more than 30 million customers around the world.

Kindred Group will expand its current casino offering by integrating EveryMatrix’s own proprietary games from Spearhead Studios and Armadillo Studios. Through this integration, Kindred will have the option to add more vendors as they become available through the supplier’s iGaming Integration Platform, CasinoEngine, which features the largest library of content in the industry supported by a comprehensive cross-vendor bonusing system.

Erik Nyman, President Americas at EveryMatrix, says: “Kindred Group is one of the earliest adopters of iGaming and sportsbook globally and been very successful since the inception. We are very pleased to become their trusted partner in the U.S. market.

“We will be supplying a large selection of games to appeal their U.S. players through our iGaming Integration Platform, CasinoEngine. This partnership further enhances EveryMatrix position to become the leading technology provider in America and we trust Kindred’s players will enjoy our games portfolio and bonus features.”

Manuel Stan, SVP USA at Kindred Group, comments: “We are very excited to partner up with EveryMatrix and bring the top-quality content from Spearhead Studios and Armadillo Studios to our U.S. customers, in our intent to bring a best-in-class Casino offering to the U.S.”

EveryMatrix has started a string of investments into the gaming development sector in 2019 by launching Spearhead Studios, and continued to invest this year in the U.S.-facing Armadillo Studios and support publicly listed Lady Luck Games.

EveryMatrix considers U.S to become the largest regulated online gaming market in world over the upcoming years and is heavily investing in licensing efforts to gain access. As a part of the Group’s U.S. extension plans, EveryMatrix is engaged in multiple licensing processes, including in New Jersey and Pennsylvania where Kindred operates.