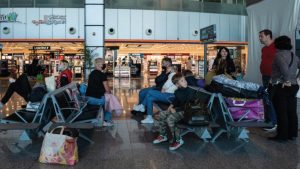 With the country having reported two million arrivals in the first five months of 2021, the government is optimistic that Egypt’s tourism recovery will be led by visitors from Eastern Europe and Middle East.

Egypt’s minister of tourism and antiquities Khaled El-Anani met with the Committee of Tourism Promotion Experts in June to discuss ways of boosting the country’s incoming tourism from the Middle East.

The meeting saw a review of a new film that will be used in Egypt’s promotional campaign in the Arab market.

The new campaign has already achieved positive results since its launch on digital platforms and websites at the beginning of May. Google results indicate that nearly 20 million Internet users in the Gulf Cooperation Council (GCC) countries searched for travel to Egypt, within a month of its launch.

Egypt is targeting $6bn-$9bn in tourism revenue for 2021, with the government hoping that an influx of visitors from Eastern European and the Gulf States will help revive the tourism sector which has been hard hit by the pandemic. Tourism revenue dropped to around $4bn in 2020 from $13bn the year before.

The number of tourists that visited the country in the first five months of 2021 totalled two million, equivalent to 400,000 arrivals per month, El-Anani noted.

It was announced in late-April that Russia and Egypt had reached an agreement to fully resume flights following talks between the two countries leaders. Flights to popular tourist destinations in Sharm el-Sheikh and Hurghada were suspended after a Russian passenger plane crashed in Sinai in October 2015.

Shalaby said the government expects over a million Russian tourists to visit the country during 2021.

“There are many in the private sector who were waiting for this decision, given the density and popularity of Russian tourism,” vice minister of tourism Ghada Shalaby stated.

Mohamed Abu-Basha, deputy head of the research sector at EFG Hermes, welcomed the decision to resume flights between Egypt and Russia, stating that it will generate roughly $3.5bn in tourism revenue. The Egyptian economy has been hit hard by COVID-19. In the past, Russian tourism represented about a third of the arrivals to Egypt, with up to three million tourists visiting annually.

“We understand that there is a high degree of readiness for the reopening of two more destinations (to Egypt), Hurghada and Sharm el-Sheikh, but we do not know yet when and how this will happen,” Aeroflot CEO Mikhail Poluboyarinov said, speaking at the start of June.