Dutch online casino games developer Stakelogic has announced that it has just followed up the April launch of its Gods of Death video slot by premiering its new five-reel Dragons and Magic innovation.

The Eindhoven-headquartered firm used an official June 26 press release to declare that its latest 243-ways-to-win video slot offers aficionados the chance to ‘become wizards and wander through a dark and mysterious forest’ in hopes of discovering ‘treasures and big wins’.

Stakelogic proclaimed that its three-row Dragons and Magic will transport players to ‘a mysterious land of fire, ice and poisonous dragons’ where they can uncover wilds, multipliers, free spins, and expanding reels in hopes of banking ‘big, mega and insane wins’. The developer detailed that the title moreover offers 50 free spins on expanding reels to anyone lucky enough to accumulate at least a trio of scatters. 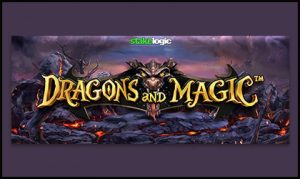 Stakelogic, used a press release to assert that the mobile-friendly Dragons and Magic is furthermore ‘hooked up’ to his firm’s Super Stake system, which permits players to double their stake ‘in exchange for the potential for additional bonuses to be triggered during the base game’. He explained that this video slot innovation subsequently sees Dragon Eyes symbols cast fire balls and wild icons onto the reels so as to allow competitors to remove lower-paying symbols and more easily secure winning combinations.

“With Dragons and Magic we have taken a popular slot theme and given it the Stakelogic touch to create a truly thrilling game. This has been achieved by adding plenty of features that deliver big win potentials while keeping players on the edge of their seat with every spin. Dragons and Magic has been a real team effort from the design to the maths and mechanics and showcases our talents and skills as a market-leading slot developer.”