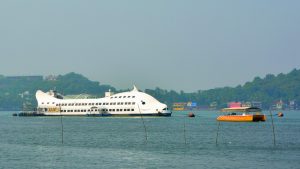 Delta Corp has revealed plans to build a new INR150 crore ($20.5m) offshore casino it says will replace one of its current vessels on Goa’s Mandovi River by mid-2022.

Replacing the Deltin Caravela, the new vessel will be built by Waterways Shipyard. Delta Corp recently acquired a 45 percent stake in the company.

“We have three licences and one of our vessels is a very small boat called the Deltin Caravela, which is what we are looking to upgrade to a larger vessel,” he said. “We started building that vessel some time ago and we believe that in the next 12 to 18 months we should have a brand new vessel indigenously built in the river.”

Delta Corp also recently announced a plan to develop an integrated resort in Pernem, Goa. The new IR would include an electronic casino, themed hotels, a water park and theatres. Live table games are currently permitted only on Goa’s six offshore casinos.

“We are trying to make the best of both worlds,” Dhebar explained. “We are going to invest in the hope that in the four to five years that it will take us to build the integrated electronic casino, the government will change the policy and the law and permit live gaming on-shore.”