Despite a difficult Q2, Century Casinos’ co-CEOs Peter Hoetzinger and Erwin Haitzmann highlighted the company’s positive results at its properties in Poland, the first of its gaming operations to reopen worldwide.

Century Casinos reported a $12.6m net loss for the second quarter, but the company’s executives were buoyed by its recovery in Poland. The Colorado Springs-based gaming operator’s net operating revenue for Q2 decreased 31 percent year on year to $36.1m.

“The first casinos we reopened were the ones in Europe, in Poland on 18 May. The casinos in the smaller cities around the country, which draw mostly from locals, are doing very well, actually a little a be better than during the same time last year,” said Peter Hoetzinger, co-CEO and president of Century Casinos, speaking during the company’s Q2 earnings call.

He remarked that results at the company’s” two larger casinos” in the country’s capital Warsaw were “softer because of the lack of tourists and business travellers”.

“Overall, we’re down about 25 percent compared to last year. Poland contributes about 10 percent of our total consolidated EBITDA. Most importantly, however, the operation already is cash flow positive.”

Looking ahead to Q3, Hoetzinger said that the majority of travel restrictions for Poland had now been lifted and tourism was gradually starting to return.

“The summer months, July, August, to mid September [were] always a slower period of time in Poland because many [people] go away for summer vacations and business tourism isn’t in full swing yet. But it is getting better, hotels are getting high occupancy like week-by-week now and that helps us.”

The company reported it made a $2.67m profit in June, after its casinos reopened in the US, with revenue up more than 80 percent from June 2019.

Following on from its casinos in Poland, Century’s Missouri properties in Cape Girardeau and Caruthersville were next in line to open at the start of the month.

“Missouri is our most important market in terms of cash flow generation, and what a success the reopening was and still is. Even though we have only half of the table game positions and about 80 percent of the slots in operation, results are record breaking,” Hoetzinger continued.

“Caruthersville was eight percent of revenues and up 40 percent on adjusted EBITDA, a huge success and a tremendous achievement by our management team.”

For July, despite competition from Illinois, results in the Show-Me State were “significantly stronger than last year”. “Cape [Girardeau] almost doubled EBITDA and Caruthersville is up about 30 percent. So it goes without saying that also this market has very quickly turned cash flow positive for us.”

In West Virginia, Century reopened Mountaineer Casino, Racetrack and Resort on 5 June with around half its 1,100 gaming positions and 354 hotel rooms.

“In June, revenue was up seven percent and adjusted EBITDA was up 57 percent compared to June of last year,” Hoetzinger explained. “July is a little softer and down compared to last year, mostly due to the newly introduced temporary smoking ban in the Virginia.”

Nevertheless, at the start of August, the property was permitted to introduce Slim Plexiglass barriers between gaming machines, allowing it to increase the number of available slots from the current 500 to over 800. “That should have a positive impact right away,” he affirmed.

Co-CEO Erwin Haitzmann confirmed the company has also received authorisation to open a smoking area at the property. “We have received approval in West Virginia to make part of our floor smoking again. So as of [7 August], we will have 118 slot machines in a smoking area, and that is something that will help,” he stated.

Century’s two Colorado properties reopened without table games in mid-June, nevertheless almost all slots are in operation in Cripple Creek and about two thirds of gaming machines in Central City.

“Even though we had less slots in operation, and for only half of the month, adjusted EBITDA in June was at a combined 51 percent year-overyear,” Hoetzinger said. “In July, our Cripple Creek property recorded its highest gaming revenue and EBITDA in over 10 years. And ofcourse, the properties are producing positive cash flow.”

In an August note, Stifel analyst Brad Boyer wrote that “we are hard-pressed to find another company in our regional operator coverage better built to endure in a post- COVID world”.

He observed that many of the operator’s properties are in markets in which other entertainment options are sparse and noted that Century generates the bulk of its profits from slot machines, which have higher margins than table games. 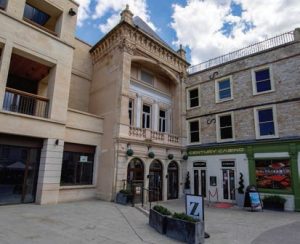 Century Casino Bath, the company’s only UK property, has gone into liquidation just two years after it opened in 2018. At the start of July, Companies House confirmed Century Casino Bath Limited had entered “voluntary liquidation”. Century Casinos first announced it had written off its entire $16.5m investment in the Bath property back in March. The company said the decision was based on “losses incurred by the casino since operations began and future forecasts of continued losses due to the current regulatory environment for casinos in England”.

Speaking at the company’s Q1 earnings call in May, Peter Hoetzinger, Century Casinos’ co-CEO and president said the company had been in negotiations to sell the property since December 2019, but reported the potential buyer had subsequently pulled out in March.