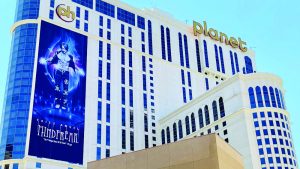 Caesars’ CEO Tom Reeg said the company plans to use the income generated from the divestiture, together with the proceeds from its sale of William Hill’s non-US assets, to reduce debt.

Caesars Entertainment has moved up the timeline for selling off one of its Strip properties, the company’s CEO Tom Reeg confirmed.

“We …think this is an opportune time to execute on our strategy of a Strip asset sale. So you should expect us to put that in motion in the early part of 2022,” he stated. Reeg added that the asking price for the property will be based off its current EBITDA.

There have already been several sales of Strip resorts this year. In September, the Blackstone Group announced that it was selling The Cosmopolitan for $5.65bn, around $4bn more than its 2014 purchase price.

Meanwhile, MGM Resorts International recently bought out its partner in CityCenter for $2.1bn, gaining full ownership of the Aria and Vdara resorts which it then sold on to Blackstone for $3.9bn in a leaseback deal.

“We’ve got a track record that we can point to in terms of what the property can generate, and the playing field has been cleared with the Cosmopolitan and Aria trades to where we should encounter pretty robust demands for a centre Strip asset that, frankly, may be one of the last ones to trade for quite some time,” Reeg continued.

“We’d expect to sell a single property and be done, but we’ll assess where we are in the market, what our balance sheet looks like afterward, and how we feel about our future prospects. But I think it will be limited to one asset,” he clarified.

Debt reduction remains a key focus. Reeg noted that Eldorado acquired Caesars with “a highly leveraged capital structure”. Since then, management has prioritised generating “free cash flow to pay down that debt”, he explained.

Caesars CFO Bret Yunker reports that the company expects its sale of William Hill’s non-US assets to close during Q1 2022, a deal it says will bring in about $1.2bn in net proceeds. Overall, Reeg said the company expects to have “in excess of $5 billion in cash” to deploy in 2022.

“The vast majority of that cash is going to go to pay down debt, where we can be in a position to be pushing almost half of our conventional debt off the balance sheet and ultimately reducing our cash interest expense by the end of 2022 to $300m or $400m a year less than it was when we closed the transaction,” he highlighted.

“Our third quarter operating results reflect an all time quarterly EBITDA record in our Las Vegas segment and a new third quarter EBITDA record for our regional segment. We are encouraged by the early results from our rebranded Caesars Sportsbook launch and we are looking forward to launching additional states by year end and into 2022,” Reeg stated.

The company would have seen a more profitable quarter if not for the impact of Hurricane Ida on the Gulf Coast and the suspension of its Lake Tahoe operations due to a fire in Northern California, he observed.

“Tahoe has pretty quickly recovered back to above 2019 levels. Not quite as strong as it was pre -fire, but continuing to build,” Reeg emphasised, although he suggested the recovery of Caesar’s New Orleans property could take longer due to the “minimum guaranteed tax payment” in Louisiana.