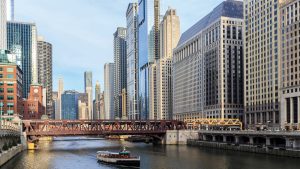 With industry commentators raising concerns about the high bar represented by the $1bn potential investment combined with the city’s tax rate, MGM and Wynn Resorts have already opted to pass on Chicago’s request for proposals process.

Chicago is searching for a company to build and operate its first casino, however several major gambling operators have already been put off by the cost together with the city’s extensive list of requirements.

The Windy City’s is looking for a 500-room, five-star hotel; up to 60,000 sq ft of meeting space; and an “iconic outdoor public space”; together with restaurants and shops that involve local brands.

“We expect to have a very unique entertainment and gaming experience that you’re not going to find anywhere else in the region,” said Chicago mayor Lori Lightfoot. “That is certainly our expectation. We’re going to be driving toward that.”

Chicago’s request for proposals closed on 23 August, with developers scheduled to present their plans to the public in late September.

Four major gambling operators – MGM Resorts International, Wynn Resorts, Hard Rock International and Rush Street Gaming – had previously expressed an interest in pursuing a Chicago casino last year, but two of them have since opted out.

In April, MGM’s CEO Bill Hornbuckle said the tax rate for the project does not “marry up” with development of a full casino-resort. “Chicago is just complicated …And while I think they’ve had some improvement, we’re not overly keen or focused at this point in time there,” he explained.

A spokeswoman for Wynn Resorts confirmed it has “decided not to participate in the request for proposals”.

Illinois-based Rush Street, owner of the Rivers Casino in Des Plaines, said it is still deciding how to respond to the “unique opportunity”.

Industry commentators suggest that what could amount to a billion dollar investment might deter bidders, particularly given the existing Illinois gaming market.

“The casinos in the state have been in nothing but a downward spiral for a decade, except for Rivers,” said Alan Woinski, president of consulting firm Gaming USA. “There’s no reason to believe that if you add a casino downtown that you’ll do anything but cannibalise the others, including Rivers. It’s kind of a zero-sum game and everybody loses.”

Under Illinois’ casino expansion law, the winning company will have to pay the state fees at the start of the project, including $30,000 for every gaming position. That would equal $120m if the casino offers the full 4,000 gaming positions allowed, according to an analysis by Union Gaming Analytics.

An additional payment based on annual gross revenues in the first three years – a fee it is suggested could be around $480m – would be made in instalments over a six-year period.

The legislation, which was approved by state lawmakers in 2019, established an effective tax rate of more than 70 percent for the Chicago casino. This was subsequently reduced to 40 percent last year after city leaders sought a change in the law.

Brendan Bussmann, partner and director of government affairs at Global Market Advisors, noted that despite having been lowered, the tax rate may still prove to be a stumbling block. “The challenge with Chicago is, the sun and the moon and the stars really have to align to make it work,” he stated.